In late October, over the course of 2 days, I took Tica Bus (I highly recommend this company) from Nicaragua to Guatemala City. I spent the night in San Salvador, and though all I really did was sleep in a hotel and grab a pupusa for breakfast, I was really impressed by the friendliness of Salvadoreños. And sure enough, when I got to Guatemala, the locals confirmed my impression –  Salvadoreños are incredibly nice!

I got to Guatemala a week early and spent a week with some old friends (if you’re thinking of heading to Guatemala City, don’t), then went to Antigua to celebrate two back-to-back festivals: Día de los Muertos (Day of the Dead, October 31st), and Día de Todos los Santos (All-Saints Day, November 1st).

Día de los Muertos isn’t a big deal in Guatemala. However, in Antigua, a city of foreigners and tourists, it was a riot! All the Americans dressed to the nines. And I was no different. I found a “Greek goddess” gown in the mercado and decided to add some candy skull makeup, and went as Persephone, the badass goddess of the underworld. 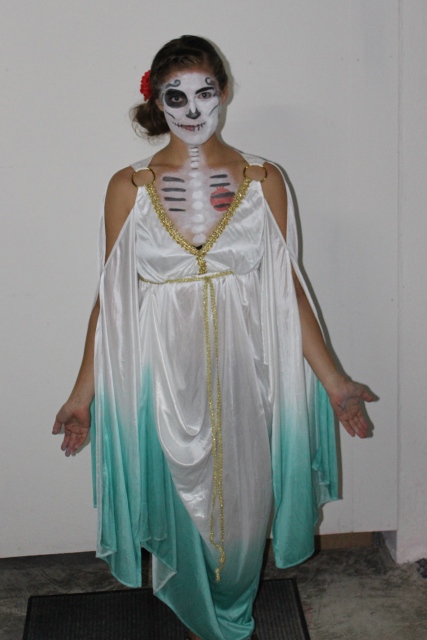 In other countries, Día de los Muertos is the day that families head to the cemetery to lay flowers on the graves of their dead, but in Guatemala this ceremony is incorporated into Día de Todos los Santos. On the morning of Día de Todos los Santos, Guatemaltecos eat fiambre – a varied mix of deli meats, sausages, and root vegetables. Supposedly it’s quite delicious, but I didn’t have the stomach to try it since the fiambre I found was tinted pink by the beets in it. It looked all squiggly to me, and I’d just woken up…

Anyway, in the afternoon it’s traditional to visit the cemetery. Guatemaltecos buy wreaths of flowers to place on the graves, and afterward the entire cemetery is, pardon the expression, alive with color.

Día de Todos los Santos is also the day of the Giant Kite Festival. This festival takes place in two pueblos in Guatemala: Sumpango and Santiago, in the region of Sacatepequez. I went to Sumpango, where all the kites were poised atop a huge hill, and little kids flew small kites on the hillside overlooking the road.

These kites can be huge! Huger than houses! And they are all made completely by hand, out of tissue paper. The bigger kites have a plastic back, and each piece of tissue paper is hand-cut and glued together. There are certain categories that the kite-designers must portray, such as “birth and renewal” or “cultural roots.” The huge kites take nearly 3 months to create! They are hoisted up in the morning by means of sticks and ropes and lots of tape, and then over the course of the afternoon the winds reduce 3 months of work to tatters.

The kites are beautiful, stunning, and quite temporary.